If you haven’t already, click the following links to read the previous six #Pottermania posts: Philosopher’s Stone, Chamber of Secrets, Prisoner of Azkaban, Goblet of Fire, Order of the Phoenix and Half-Blood Prince. This edition will cover the book-to-film adaptation of Harry Potter and the Deathly Hallows – Part 1, based on J.K. Rowling’s seventh book of the Harry Potter series.

The film begins as new Minister for Magic, Rufus Scrimgeour, presents a strong front to the Wizarding World. He states that the Ministry will do everything in their power to prevent Voldemort from gaining more control. However, this statement is soon to be contradicted as Snape heads to Malfoy Manor to inform Voldemort, and his most loyal Death Eaters, of the Order’s plan to move Harry Potter from the Dursleys. After Snape’s report, Voldemort steals Lucius Malfoy’s wand as his own cannot kill Harry due to the twin core between them. He then boasts about putting muggles, muggle-borns, and muggle sympathizers into their rightful place, which he emphasizes by killing the woman who used to be the Hogwarts Muggles Studies Professor and then feeds her to Nagini.

Order members begin to arrive at the Dursleys’ home to accompany Harry to a designated safe house. Mad-Eye Moody starts his “no time for pleasantries” speech by jumping right into telling Harry the plan, which is that six of them will drink Polyjuice Potion in order to create six decoys. Before Harry has time to argue, he’s cut-off by Mad-Eye who states that they are all 18+ and are free to make their own decisions, which gives Hermione free reign to yank out a few of his hairs. After the transformations are complete, each decoy pairs off with an Order member and they all take flight on their way to the Burrow. However, once they reach the clouds they are instantly under attack by a swarm of Death Eaters. The real Harry, who flew alongside Hagrid, arrives at the Burrow first after nearly being killed by Voldemort. His wand had acted on its own free will to protect him, which results in Harry having another vision of Voldemort. He is seen torturing Ollivander for his poor advice to switch wands as an attempt to get around the power of the twin cores. Minutes later, Lupin arrives dragging an earless George Weasley at his side who was injured in the chaos. The duos slowly begin to return, each noting that they were betrayed, until it is confirmed by Bill Weasley that Mundungus Fletcher fled when he saw Voldemort, and Mad-Eye was killed in the process.

The next morning, Rufus Scrimgeour meets with Harry, Ron, and Hermione in order to give them items that were willed to them by Albus Dumbledore. Ron is given Dumbledore’s Deluminator invention, Hermione receives a copy of The Tales of Beedle the Bard, and Harry is presented with the Golden Snitch he caught in his first Quidditch match. Harry was to also receive the Sword of Gryffindor, but Scrimgeour notes that it was not Dumbledore’s to give away. Regardless, Scrimgeour states that it is currently missing from its previous spot in the Headmaster’s office.

After the trio receive their items they begin to get ready for Bill & Fleur’s wedding, which is the small light in the overwhelming darkness of the recent events and unsure future. However, this happiness is quickly cut short when a patronus is sent to alert them to scatter as Death Eaters have killed Scrimgeour, taken control of the Ministry, and are on their way. The trio disapparate to a nearby muggle city and attempt to take refuge in a diner, but are soon attacked by a pair of Death Eaters. They fight their way out and decide that the old Order Headquarters at Grimmauld Place would be the safest place for them to hide, as Harry inherited it after Sirius died.

They discover that “R.A.B.” from the note in the fake locket horcrux stands for Sirius’ younger brother Regulus Arcturus Black. They search the house for the locket and eventually come across Kreacher, the Black family’s house-elf. He reveals that the locket indeed was Regulus’s and that Mundungus stole it when he pilfered through the house after Sirius was killed. Harry requests Kreacher to bring Mundungus to the house, and with a little house-elf magic and the help of Dobby the two manage to drag him there. The thief reveals that he did take the locket, but he had to give it to a Ministry woman who threatened to fine him for selling Dark Artefacts without a license. After questioning him for a description of the woman he reveals that she is the villainous Dolores Umbridge.

The trio decide the best plan is to disguise themselves as three Ministry employees with the help of some Polyjuice Potion. After a few tiny hiccups during their initial arrival, the three manage to find Umbridge in a courtroom viciously interrogating a muggle-born. Harry breaks character and stuns Umbridge, Hermione snatches the locket, and they all race for the lobby exit. Unfortunately, Death Eater Yaxley grabs a hold of Hermione which grants him access to Grimmauld Place. Therefore, Hermione has to shift their disapparation to a forest from her childhood and Ron is splinched in the process.

After several attempts to destroy the locket the trio decided to wear it in turns, as Voldemort’s trapped soul darkens the mind of anyone who wears it. Weeks go by without finding or destroying any Horcruxes, which agitates Ron to the point of leaving. Hermione is distraught about Ron’s departure, while Harry is flooded with another vision of Voldemort. This time he is seen badgering wand-maker Gregorovitch to tell him about the teenager who stole a special wand from him decades earlier. In an attempt to move their journey in the right direction, Hermione and Harry decide to finally visit Godric’s Hollow.

Harry wants to visit his parent’s graves so they visit the cemetery first, and Hermione sees the same symbol that’s etched in the book that Dumbledore gave her. They then visit Bathilda Bagshot because Harry heard that she knew Dumbledore from Ron’s Aunt Meriel at the wedding, and they think she may have the Sword of Gryffindor. This turns out to be a terrible mistake as Bathilda is not alive but actually a corpse that is being possessed by Voldemort’s snake Nagini. She attacks the duo and in their rush to escape Hermione accidentally breaks Harry’s wand. However, before their departure, Hermione managed to grab Rita Skeeter’s book on Dumbledore. After reading a few chapters she concludes that the young thief from Harry’s vision is actually Gellert Grindelwald.

Harry takes the first watch to protect their makeshift home, and at nightfall he sees a doe Patronus in the nearby trees. He follows the doe to a frozen pond where he discovers the Sword of Gryffindor lying at the bottom. Harry courageously jumps into the water but the locket springs to life and tries to strangle him while he is beneath the ice. Then from out of nowhere, Ron arrives just in time to save Harry. The two work together to open the locket and destroy the piece of Voldemort’s soul that was contained inside it. When the pair venture back to the camp Hermione is very hostile towards Ron, until he explains how her voice and Dumbledore’s Deluminator helped him return to save Harry’s life.

Hermione decides that their next step should be to visit Xenophilius Lovegood, because he was wearing the unique symbol at the wedding. During their visit they learn that the story of ‘The Tale of The Three Brothers’ from Hermione’s book represents the three Deathly Hallows. The symbol incorporates the Elder Wand as a stick, the Resurrection Stone as a circle, and the Invisibility Cloak as a triangle. Sadly, they also learn that Luna has been taken by Death Eaters when Xenophilius attempts to trade Harry to them for her return. The trio think fast and disapparate into another forest, but this time they land right in the middle of a group of Snatchers. They put up a good fight but are eventually captured, so Hermione is forced to disguise Harry’s face with a stinging spell. Unfortunately, the lead Snatcher figures it out and decides to take them to Malfoy Manor instead of the Ministry.

Upon arrival, Bellatrix notices that they are in possession of the Sword of Gryffindor, which leads her to attack the Snatchers and to throw the boys in the dungeon. She then tortures Hermione about how she got into her Gringott’s vault, while Harry and Ron find Ollivander, Griphook, and Luna in the dungeon shadows. After Harry pleas for help, Dobby arrives to take Luna and Ollivander to safety and to help the boys escape. A small battle ensues, but an impressive distraction allows Dobby to disapparate the entire group to Shell Cottage. However, during their escape Dobby was stabbed by Bellatrix’s flying knife and ends up dying on the beach. The film ends as Harry buries his courageous friend, while he sees Voldemort stealing the Elder Wand from Dumbledore’s tomb at Hogwarts. 1) “How dare you defy your master!” – Bellatrix Lestrange “Dobby has no master. Dobby is a free elf, and Dobby has come to save Harry Potter and his friends!” – Dobby

2) “Fair warning, it tastes like goblin piss.” – Mad-Eye “Have lots of experience with that, do you, Mad-Eye? [Moody glares] … Just trying to diffuse the tension.” – Fred

4) “You stupid elf! You could have killed me!” – Bellatrix Lestrange “Dobby never meant to kill. Dobby only meant to maim, or seriously injure.” – Dobby

5) “How long do you think she’ll stay mad at me?” – Ron “Just keep talking about that little ball of light touching your heart, and she’ll come ’round.” – Harry

7) “We didn’t celebrate your birthday, Harry. Ginny and I … we’d prepared a cake. We were going to bring it out at the end of the wedding.” – Hermione “Hermione … I appreciate the thought, honestly. But given that we were almost killed by a couple of Death Eaters a few minutes ago.” – Harry “Right. Perspective.” – Hermione As usual, I have added a couple of bonus items for the hardcore Harry Potter fans that want a little extra. Check out Dan Dalton’s seventh Buzzfeed Article covering him watching the film for the first time in adulthood. Also, see the photos below for a few of my favourite costumes from Bill & Fleur’s Wedding. Lastly, click the video link below for all the deleted scenes of the seventh film of the series. 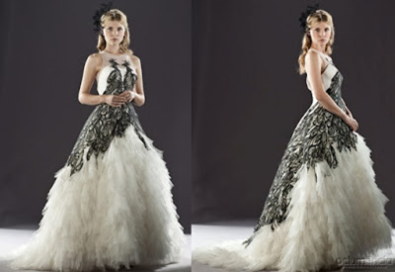